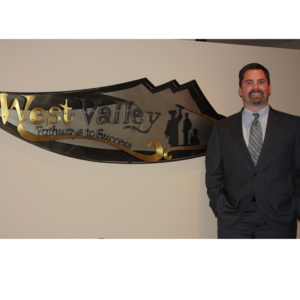 The succession plan worked perfectly. Effective July 1, 2020, Kyle Rydell is West Valley's new Superintendent. Kyle had been the assistant superintendent for the past year with the intention of taking the top job when Dr. Gene Sementi retired.
Mr. Rydell is a graduate of EWU, earned his masters at Gonzaga, his principal certification at EWU, and his superintendent credentials at WSU.  He began his teaching career in East Valley where he advanced to assistant principal and athletic director before moving to Trent Elementary as principal.  After 14 years with East Valley he was hired as superintendent in Republic and spent five years as superintendent in Liberty School District.
Kyle was raised in the Spokane Valley and he and his wife Laura have a college age daughter and a son who attends WVHS.  In his first year with West Valley Kyle was intentional about meeting and getting to know the staff and the West Valley community.  He has an open-door work style and looks forward to continued engagement with students, staff  and the community.
Congratulations Kyle and all the best in your new role as superintendent!
Published July 1, 2020 Print