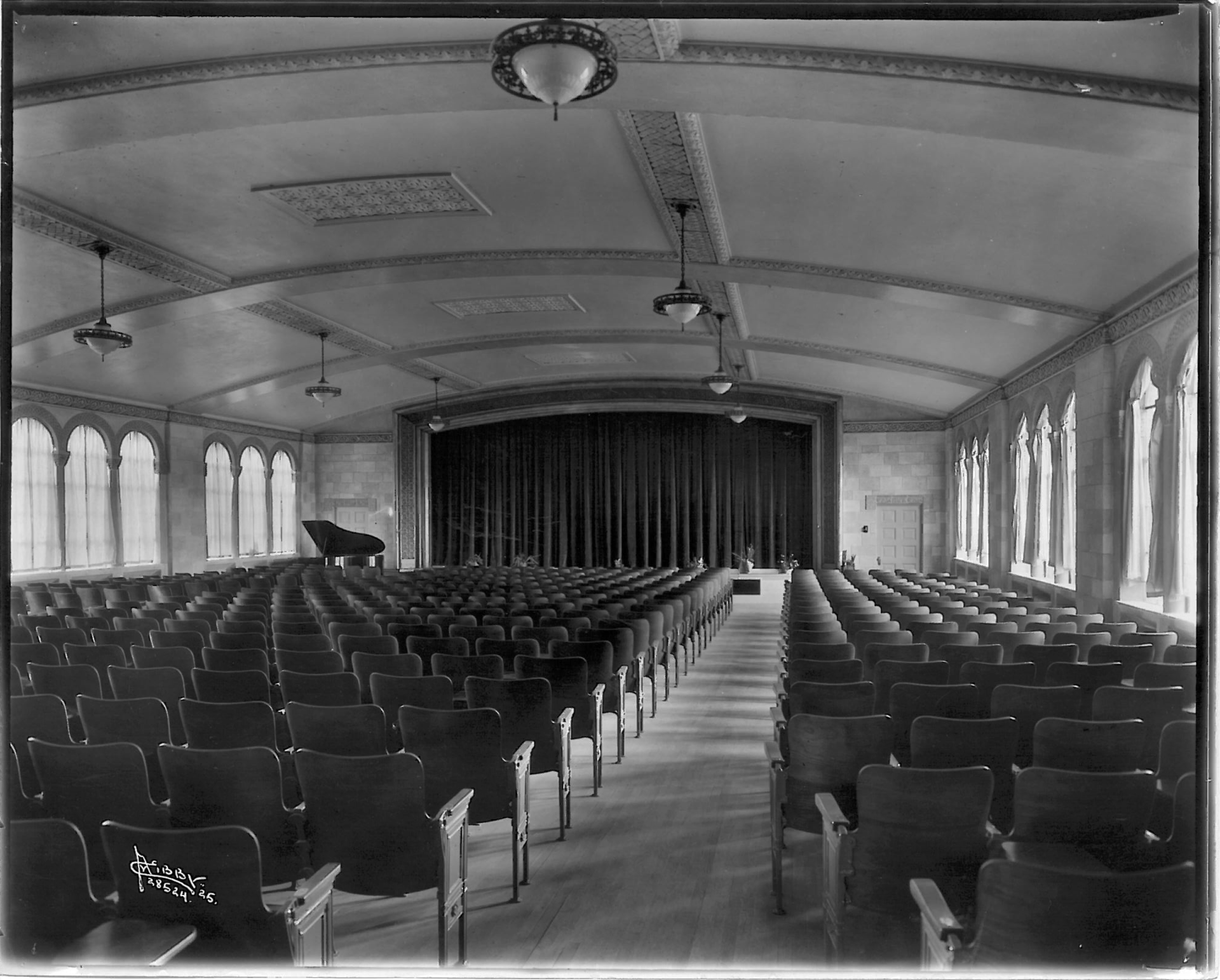 The Auditorium at the original West Valley High School
In 1910 there were several attempts to organize a high school so the Orchard Avenue building was used and it housed only students in ninth grade. By 1915 the student numbers had increased from four to 33. Otis Orchards organized a high school and by 1915 had 20 students. Opportunity School District also organized a high school and had 22 students but later closed. Vera School District had a high school program in 1914-1915 housing 31 students.
Greenacres and Trent remained non-high school districts until they became part of Union High School Districts #201 and #202 respectively. Re-organization followed and three high schools and district remained; Otis Orchards, Vera, and Millwood. Vera eventually became Central Valley School District and Millwood became West Valley School District.
In 1922 Union School District #201 was established consisting of Vera, Millwood, Greenacres, Lone Fir, and Saltoso Schools. The governing body became an obstacle. When a district merged, their board president would join the new board. By the time 15 districts had merged the Union School Board became so large that “friction, dissension and inefficiencies” easily resulted.
In 1924 Trentwood #118, Pleasant Prairie #52 and Orchard Park #143 (Orchard Park being Parkwater, Orchard Avenue, Dishman, Millwood and Pasadena Park) united to form Union High School District #202. More than 90% of votes cast were in favor of establishing the larger unit and bonds were voted a short time later for the erection of a new high school building. The people of the Valley again showed their desire for better schools and better equipment by casting a 90% vote in favor of the bonds.
Millwood High School was housed in the grade school building until increases in enrollment made the facilities inadequate. Outside students were no longer admitted but soon there was not enough room for local students either. An article in the March 7, 1924, Valley News Herald spoke of the need to make a provision for the boys’ and girls’ education and training them to be the men and women of tomorrow. “The new high school is an immediate necessity if the children of the districts are to be cared for adequately.” 90%+ voted in approval on May 1, 1924. 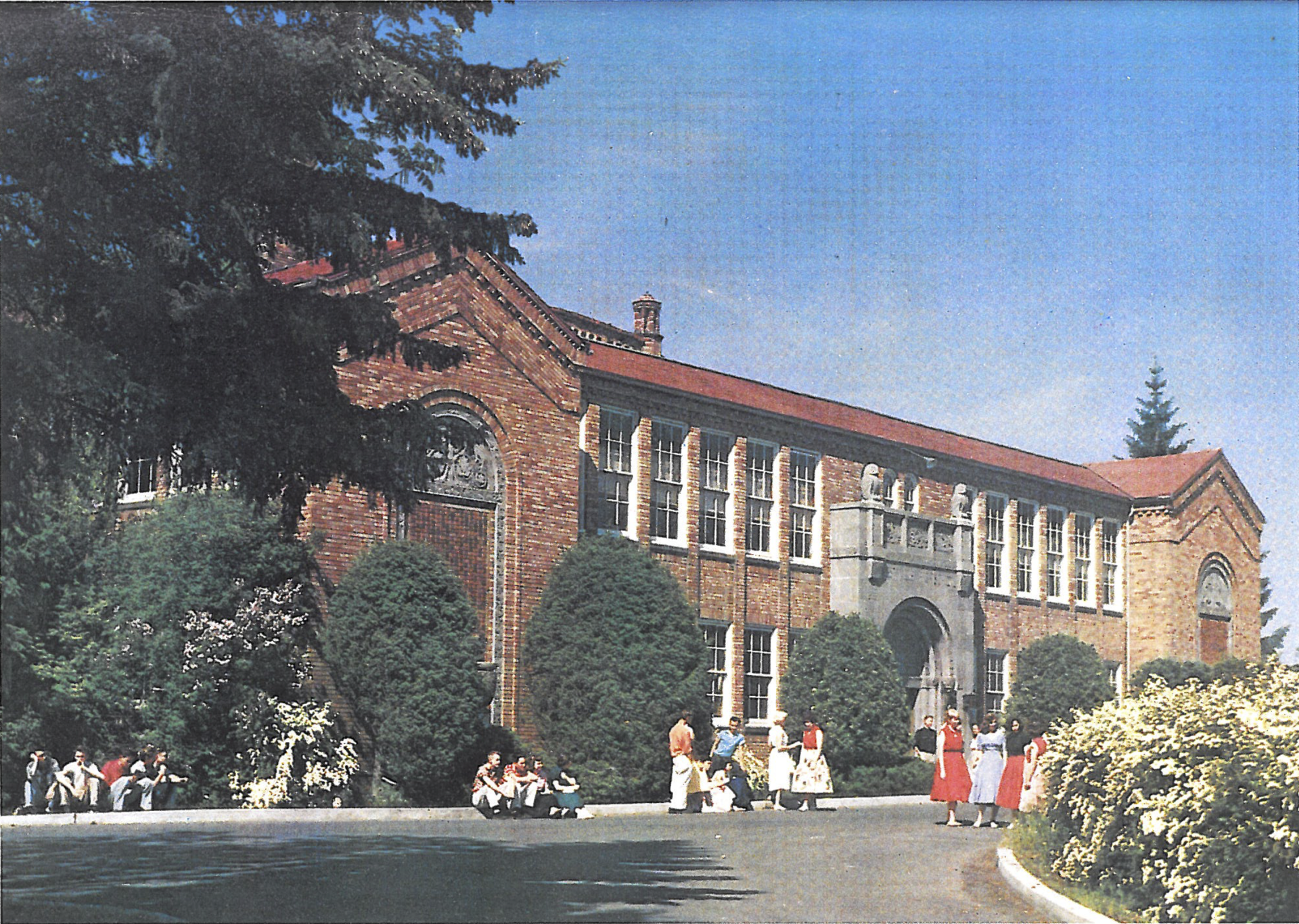 West Valley High School (Circa 1960)
The new building was erected on seven acres facing Trent Highway and was one of the most up-to-date structures of its kind in the Northwest. It was designed for 330 pupils and began with 9 teachers. The building included the Superintendent’s office (Arthur B. Ness) and was dedicated on February 2, 1925. (25 years after the district was formed). Ness dedicated the building “to the spirit of truth, service, and patriotism.” He expressed the wish that better and more worthy citizens might come from the new school.
The new building was soon at maximum capacity and inadequate for the unanticipated increases in attendance. In 1932-33 a double platoon system began. Two wings were added to the original building. The school now had 15 classrooms and 16 teachers.
In 1957 West Valley School District #363 was established and Union High School was rededicated West Valley High School.